Sports for Everyone-- Session I: Opportunities for Sports as a Career in India 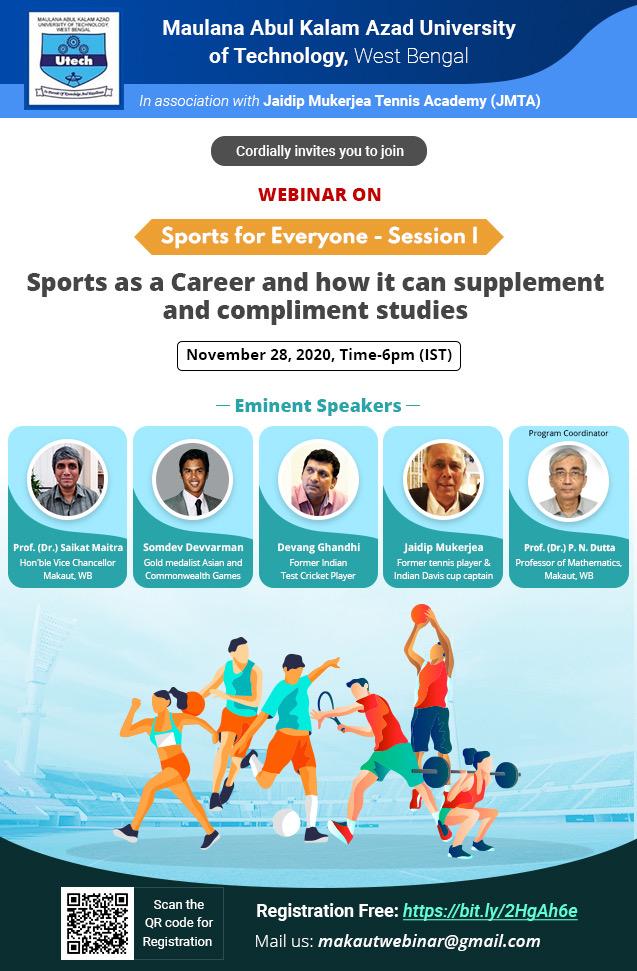 Do you have a passion for sports? Are you always fiddling with a ball or a bat or a racket? If yes, then don’t let your skill be subdued, rather make it your profession by exploring career opportunities in your preferred field. Sports can be a very lucrative and glamorous career for young enthusiasts. The successes of Indian sports persons in the national and international competitions together with the job opportunities provided by the government, corporate private sector and Indian Army to the successful Indian sports persons have made it an important field for career building. Sports as a career keeps you mentally and physically fit, while endowing you with fame.

Maulana Abul Kalam Azad University of Technology (MAKAUT), WB is organizing a webinar in association with Jaidip Mukherjea Tennis Academy (JMTA) entitled "Sports for Everyone-Session I" on 28th November November, 2020 at 6.00 pm (IST). The discussion by experts will be regarding sports as a career and how it can supplement and compliment studies. The problems behind opting for sports as a career in India and how to overcome such problems will also be discussed.

Register in advance for this webinar:

After registering, you will receive a confirmation email containing information about joining the webinar.

The eminent speakers in this session are:
Prof. (Dr.) Saikat Maitra, Hon'ble Vice Chancellor, MAKAUT, WBMr. Somdev Devvarman, Gold Medalist in Asian and Commonwealth GamesMr. Devang Gandhi, Former Indian Test Cricket PlayerMr. Jaidip Mukerjea, Former Tennis Player & Indian Davis Cup CaptainProf. (Dr.) P. N. Dutta, Professor of Mathematics, MAKAUT, WB (Program Coordinator)Mr. Somdev Kishore Devvarman is a former professional Indian tennis player. He hit the headlines for being the only collegiate player to have made three consecutive finals at the NCAA, winning back-to-back finals in his junior and senior years at the University of Virginia. In 2010, Somdev won the gold medal in the men's singles event of XIXth Commonwealth Games at the R.K. Khanna Tennis Stadium in New Delhi, and he followed it up with both men's singles and doubles gold in the 2010 Asian Games in Guangzhou, China. He was coached by Scott McCain.

In 2011, Devvarman received the Arjuna Award from the Indian government. In 2018, he was awarded with the civilian award Padma Shri.

He was India’s no.1 player from 2008 to 2016. He has played all the Grand Slam tournaments i.e Wimbledon, French Open, Australian Open and U.S Open.

Mr. Devang Jayant Gandhi is a right-handed opening batsman and a very occasional right-arm medium-pace bowler. He played for Hadleigh and Thundersley Cricket Club, Essex. He is a former Indian Test Player and played domestic cricket for Bengal in the Ranji Trophy and East Zone in the Duleep Trophy. He made his international debut in the first Test against New Zealand in Mohali in 1999.

Mr. Jaidip Mukerjea was a Davis Cup player for 13 years from 1960 to 1973. He played for the Indian team which reached the Davis Cup final for the first time in 1966. He played 97 Davis Cup matches for India. Mr. Mukerjea was a regular player in the international men’s circuit from 1960 to 1974, including all Grand Slams. He presently runs a tennis academy in Kolkata named Jaidip Mukherjea Tennis Academy (JMTA).

He received the  Arjuna Award in 1967. He is the First Indian to receive the lifetime services award from International Tennis Federation. He also bagged the Khel Guru Award from Govt. of West Bengal in 2015.

Moreover, he has Co-founded the Asma Foundation, a program designed for underprivileged children to play tennis and use state of the art equipments for free in Kolkata.

An aspiring young professional have career opportunities in coaching, athletic administration, sports medicine, sport promotion, sport psychology, sports journalism and so on.  Entrepreneurship is also an attractive option in this field. This Webinar will provide insights regarding choice of Sports as a career from the eminent personalities.
For more information about the University please visit: https://www.makautwb.ac.in/ 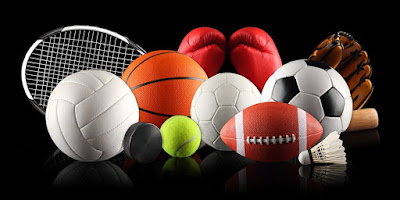