The Faculty Development Programme on VR/AR Technology: A Grand Success

Faculty Development Program (FDP) on Virtual Reality (VR)/ Augmented Reality (AR), in cooperation with Maulana Abul Kalam Azad University of Technology (MAKAUT), WB and industry experts rolled out on 18th January 2020 at the Salt Lake campus of the University.
After the grand inaugural conference organized at ITC Sonar, Kolkata on the 19th of December, the Faculty Development Program (FDP) spanning over another 9 days, was open to all interested College Faculties.

The Course Co-ordinator was Prof. Samir Mukherjee, the Head of the Department of Emerging Technology & VR/AR/MR/XR, MAKAUT. An eminent personality in this field, Prof. Mukherjee is the Founder and Creative Technologist of VR AR Academia, India. His field of interest is amalgamation of art, culture and technology into a distinct bend of novelty. He is the Ambassador of World VR forum, Geneva, Director of International VR Foundation, Beijing, China and Chapter President ARVRA, USA.

Glimpses of the Programme at ITC Sonar on the 19th of December, 2020 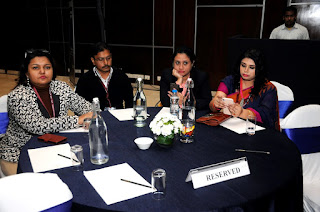 The FDP at Salt Lake Campus

The FDP at Salt Lake Campus of MAKAUT was inaugurated by Prof. (Dr.) P. N. Dutta of MAKAUT and Prof. Samir Mukherjee on the 18th of January, 2020. The significance of the FDP is that, it is one of the first of its kind in this field in the country.

The faculties participating in the Program were from Webel DQE Animation Academy,  ADTA Academy, MAKAUT's Computer Science and Engineering Department, Heritage Academy, Sanskrit College and University, George College and even a woman entrepreneur.

In the very first day on 18th January, 2020, Prof. Mukherjee introduced the students to the concepts of VR, AR, MR and XR. He elaborated on the relevance of this emerging technology for our academic curriculum and also in the fields of entertainment, journalism, healthcare, tourism and so on. He said that this technology has immense scope to attract students in the classroom. Actually, traditional mode of teaching is not always adequate to retain the students in classroom, as they can get much information from the internet. He also displayed the Drone, an essential tool of applying VR technology.

The Second Class on 19th January, 2020 was a Foundation Course in Multimedia/Animation/2D/3D and its relevance to VR/AR/MR/XR Technology. It was explained by Ms. Brati Chatterjee, Sr. Application Developer, Accenture.

The theoretical aspects of VR/AR were explained in the third day.

Mr. Avi Dwivedi from Unity explained different concepts of 3D Imaging on the third day, 25.01.20. He said that there is no such thing as 3D Image, but it appears 3 dimensional and that technique must be learnt.

C++ Programming was explained by an expert in this field Mr. Pritimoy Sanyal of MAKAUT, on that day.

The Fourth Day (01.02.20) was very interesting, as Ms. Sayantani Putatunda, an eminent Bengali writer explained different aspects of Story Telling in general and VR Story Telling in particular in the First Half. She emphasized that VR stories must be brief and hence very sharp. In the Second Half, VR Film Maker and also a woman entrepreneur Ms. Dhriti Chatterjee explained about VR/AR film making, story-boarding and screenplay with video clippings.

The Fifth Class on Drone in VR/AR Education and Application was taken care of by Mr. Anjan De, Chief Operating Officer of Aspire-IIT in the first half.

In the Second Half, Prof. Samir Mukherjee's topic was VR/XR in Projects and Start-Ups.

In the Sixth Day also Ms. Dhriti Chatterjee impressed the students by explaining the nuances of VR stories for film making. The 7th Day was taken care of by Prof. Samir Mukherjee. All the classes were interactive and very interesting, according to the participating
faculties.

The participating faculties eagerly attended the next session on 15th February, which was taken care of by Mr. Avik Banerjee of Ericcson.

The last session on 16th February was that of a hands-on training for all the participants. Prof. Samir Mukherjee guided the students and aroused their interest for further studies in this upcoming technology.