Know About the New Age Technologies VR/AR/MR/XR:
Inaugural Conference on 19th of December 2019 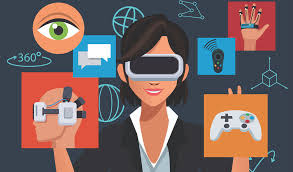 Countdown begins for the Conference on Virtual Reality (VR)/ Augmented Reality (AR), which is to be organized in cooperation with Maulana Abul Kalam Azad University of Technology (MAKAUT), WB and industry experts. A grand meet will be organized at ITC Sonar, Kolkata on the 19th of December. That will be followed by a Faculty Development Program (FDP) spanning over 10 days, which will be arranged at the Salt Lake Campus of MAKAUT, which is open to all interested College Faculties. It will not be restricted to faculties of MAKAUT affiliated Colleges, but all other Colleges.

Augmented Reality(AR) adds digital elements to a live view often by using the camera on a smart phone. Virtual Reality (VR) implies a complete immersion experience that shuts out the physical world. Extended Reality (XR) refers to all real-and-virtual environments generated by computer graphics and wearables. Mixed Reality (MR) experience, which combines elements of both AR and VR, real-world and digital objects interact.

About the Course and Speakers: